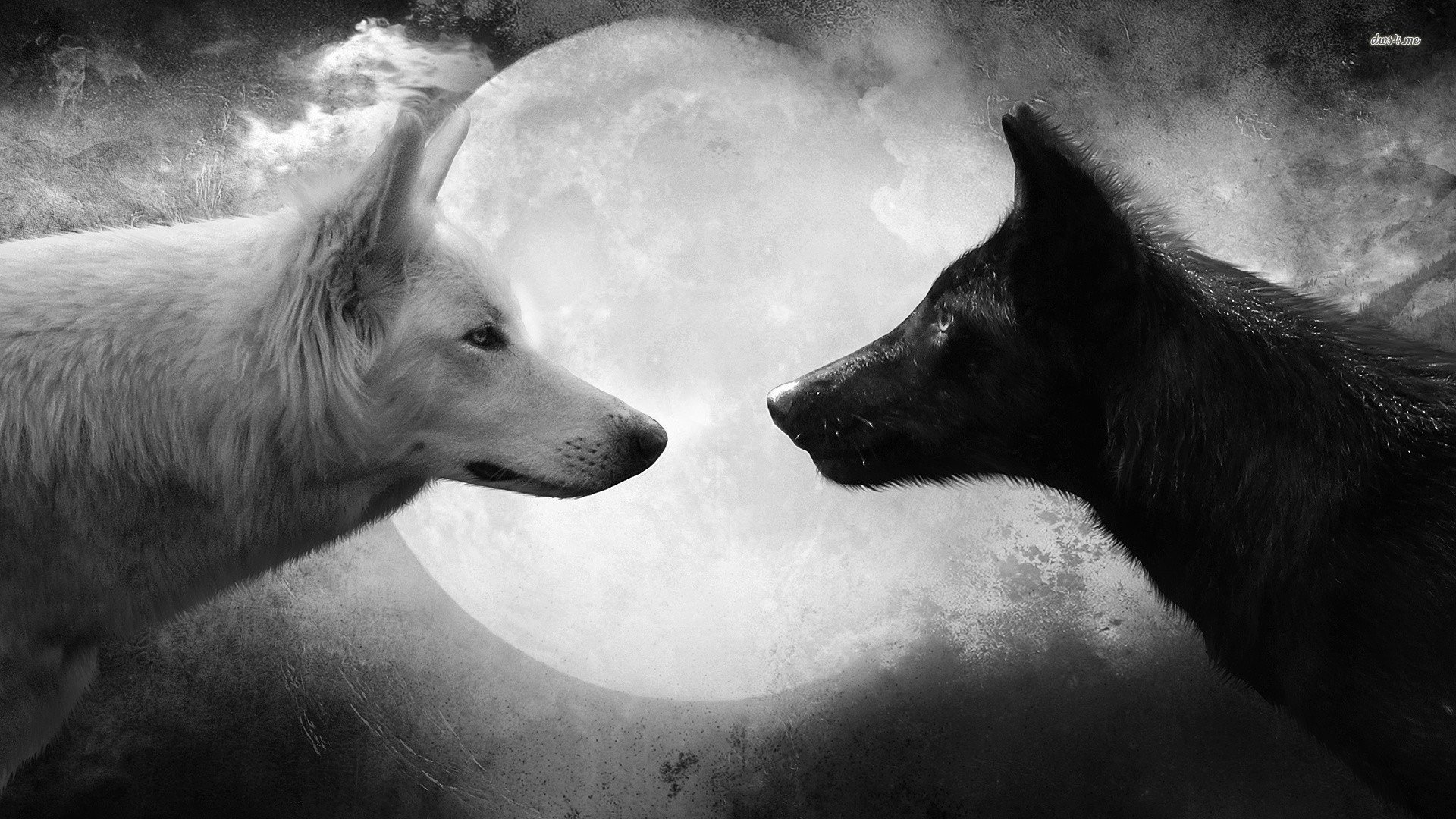 Snow is falling in feathery bits.

The wolves stare at each other. The black wolf snarls showing a row of pointy teeth. The white wolf walks to its left to find purchase to jump at its opponent. The black one mirrors him. *Through gritted teeth* Never breaking eye contact. *begin fast* Suddenly the White wolf is airborne. The black wolf jumps to a side. With an icy bark the white wolf grabs his opponent’s neck with its jaws. The black wolf struggles off. *end fast* Snow beneath their feet is squashed. Blood drips from the black wolf’s neck and make pink spots in snow.

*pause* Wolves stare. They circle each other again.

One wolf is evil. He is anger, envy, sorrow, regret, greed, guilt and ego. The other is good. He is joy, peace, hope, kindness, truth and love.

The battle between good and bad is as old as man. History is littered of accounts of evil men doing bad deeds and good men doing good deeds to counter them. Each time the world plunged into darkness, the forces of light drove them away. This is a universal truth isn’t it?

As I said before, to know one wolf from the other you need to know which wolf is which. For that you have social norms. You have social conventions. You have philosophes that you follow that tell you this is good and this is evil. And there is an inherent desire to be part of the good team.

Are the concepts good and evil absolute? Most of you might say yes. How stupid a question to ask? Vile acts have always been frowned upon by the righteous.

But I would say no!

There were times and places in history when and where things that we call evil were celebrated as good and good was considered evil. Now we would not even think twice about drinking coffee. During the 16th and 17th centuries in Turkey it was considered an act so vile that it was enough to get a death sentence. We consider murder to be an evil act, but there were numerous cultures such as Aztecs that considered human sacrifices to be a holy act. George Washington had a marijuana garden for his personal use. In Victorian English upper class even the words “legs” and “trousers” were considered taboo. They called trousers *British accent begin* “the southern necessity” *British accent end* and they covered the legs of furniture too!

Tides of time has a way of shifting morality and what it means. Who knows? Someday wearing socks *show socks* might be considered evil. Picking nose *brush nose* in public might become acceptable. There are no absolute definitions of good or evil. It is merely derived from the society and time you live in.

And the wolves are still fighting. But now in your eyes they change colours time to time. The one that was black turn white at times and one that was white turns black at times. It is getting hard to say who was who in the beginning and who is who now and who will be who next.

We tend to associate darkness with evil and light with good. But, without darkness to compare it with, light cannot be seen as light. And darkness is merely the absence of light. Take this room for an example. It is darker than the surface of the sun but more illuminated than the deepest point in the sea. Similarly, good and evil are relative masseurs. Without evil to refer to, good loses all meaning. A perfect Utopian society that knows no evil is doomed to fail. So there is no absolute measure of good and evil.

Still the fight goes on. Both wolves have morphed their fur into an indistinct shade of ash. You try to reason one is whiter than the other only to realise that you are wrong.

The story of the fighting wolves is a Red Indian parable. There the morality does not find its way to ash. The wolves stay the same colour, black and white. This makes the answer to the question “which wolf will win?” be quite simple.

“The one who win is the one you feed!”

You might think the society and social conventions are updated and current. And we can use them. Let me tell you a story; the rocket boosters of modern spaceships have a certain width. The engineers who built them wanted to make them wider. But they had to transfer them by rail roads to the launch site. And the railroad tunnels are only slightly bigger than railroad tracks. How wide is a US rail road track? 4 feet 8 ½ inches. That is a strange number! The reason for that is because US railways were built by English expatriates and *British accent begin* that is how they built railroads in England my fine chaps. *British accent end*

But why did they do so in England? It is because they used the same wheel spacing as wagons.

Right. But why did the wagons have that spacing? Because that is the spacing in old English wheel ruts.

And who made the wheel ruts? The Roman Empire.

And the Romans had to use that spacing because…that is the average width of the buttocks of two Roman war horses!

So because of social conventions the size of our rockets are determined by the size of the backside of horses who lived and died 2000 years ago.

Now all of you were laughing but ask yourself now; when you have to take a decision that involves morality, what do you consult? Most of you will be referring to 2000-4000 year old socio-philosophies to which you were indoctrinated since you were a child. You are taking moral decisions today based on sketchy belief systems thought up in the Bronze Age!

And even then why do you “be good and not bad”? It is because you are blackmailed and bribed. If you do bad, you are sentenced to torture. If you do good, you are bribed with pleasure.

If you give a coin to a beggar thinking it as an “investment” for you to get infinite treasure or if the only reason you would not come beat me to a pulp right now is because you are afraid of being punished, *pause* *whisper* in essence, you are not a very good person.

Think for yourself. There are no absolute definitions or limits to morality. The contemporary society offers you a convention not an absolute truth. Decide what is good and what is bad for yourself. Be good for the sake of being good. Not because you are bribed or blackmailed.

Most importantly; *pause* the next time you build your moral rocket boosters, *pause* do not let a 2000 year old dead horse backside *pause* confine you!

(Over to you toastmaster)